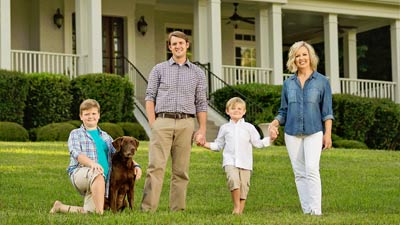 Dr. Matthew Blake Limbaugh (Matt) was born in Sylacauga, Alabama and grew up in Huntsville. He attended Auburn University, where he graduated in 1999 Cum Laude with a B.S. degree in Chemistry. Dr. Limbaugh then attended the University Of Alabama School Of Dentistry in Birmingham. Upon graduation from dental school in 2003, he was awarded numerous honors, including induction into the exclusive Omicron Kappa Upsilon dental honor society, was named one of two Hinman Scholars from UAB, and received two additional awards for scholastic achievement, patient care and clinical ability: the Academy of Operative Dentistry Award and the Prosthodontic Award for Outstanding Achievement.

Dr. Limbaugh immediately entered the General Dentistry Residency at University Hospital in Birmingham after graduation. He completed an additional two years of training there, including the second year as the Chief Resident, at which time he received the Senior Resident Award. After completion of the residency in 2005, Dr. Limbaugh returned to Huntsville to begin his dental career. Dr. Limbaugh continues to serve as an Adjunct Clinical Professor of Implant and Restorative Dentistry at University Hospital in Birmingham, AL.

Dr. Matt Limbaugh married his fellow dental school classmate, Dr. Lindsay Durham Limbaugh of Fort Payne, Alabama, while they were in their residency programs. Dr. Lindsay Limbaugh is now an Orthodontist in Huntsville, practicing with her partner, Dr. Charles Ray Graham. Matt and Lindsay have two sons named Brady and Grayson. While they enjoy full time careers as dental professionals, they both feel that their new “parenthood” status is just as rewarding. The Limbaugh Family enjoys being back in Huntsville and look forward to many happy years to come.

Why Cosmetic Dentistry? In this day and age, we all know it – there is nothing more eye-catching than a set of beautiful white teeth. Cosmetic dentistry provides patients a clear path toward a beautiful smile that will be noticed and remembered by everyone they see....

The Advantages of Professional Teeth Whitening Are you looking for a picture perfect, whiter smile? With the advancement in professional teeth whitening treatments, so many more people are experiencing the results of having their teeth whitened and are enjoying...